We had a lot of fun on our trip to Washington D.C. We left early Friday and got there about 9pm, Washington time. So we spent all day travelling! We had a neat taxi ride to our hotel. On our way to the hotel we pass most of the monuments, and it was really neat seeing them all lit up.
Posted by Losee's at 11:34 AM No comments: 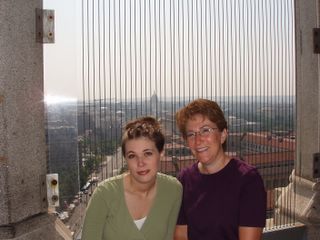 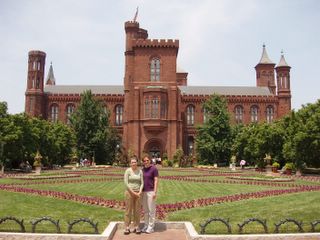 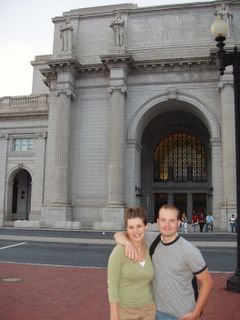 Today was our first day out in Washington D.C. It is very hot and humid...not a good mix! We started off by going to the first US Post Office. It is a beautiful huge building. It was neat being up at the bell tower and looking down at Washington D.C. We then headed off to the Hollocost Museum. That is a really neat Museum. We spent a lot of time there. We then went to the Smithsonian for a little bit and relaxed in a beautiful garden there. That night we went to Union Station and had dinner there.
Posted by Losee's at 11:28 AM No comments: 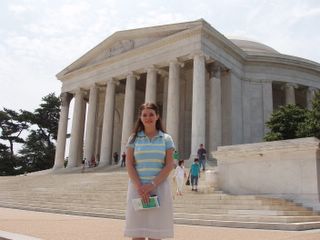 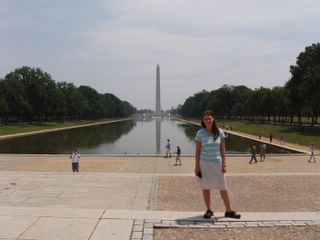 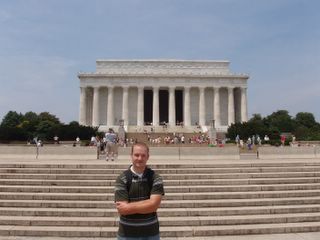 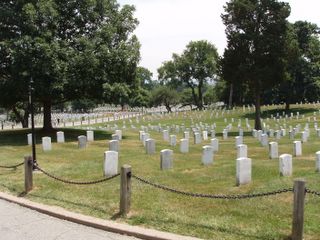 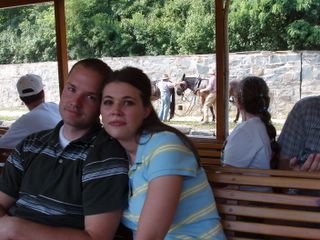 Taking ride on a canal boat...the mules that pulled us are in the background. 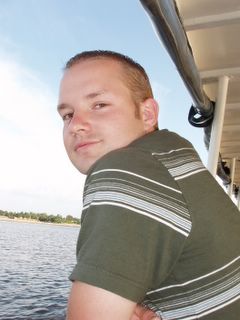 Taking a ride on the Patomic River 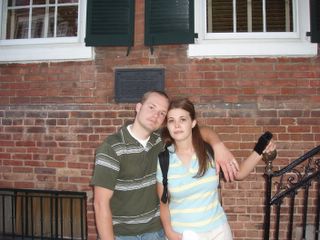 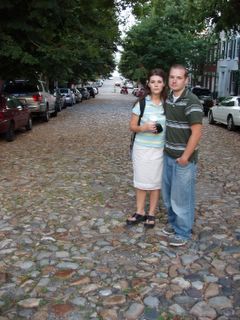 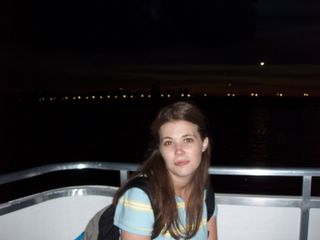 Night cruise on the Patomic River

Today was probably the most enjoyable day for me. Casey and I went on a bus tour of Washington D.C. where we were able to hear and see a lot of the historical places there. I loved seeing all the monuments, going out to Arlington to see all the gravestones in rows. After our bus tour, we met my parents out in Georgetown where we took a ride on the C&O Canal where we were pulled by mules, just like they did many years ago. It was really interesting hearing about the history of the canal. We ended the night taking a night cruise on the Patomic River to Alexandria and back. It was so relaxing and beautiful seeing all the Monuments lit up.
Posted by Losee's at 11:18 AM No comments: 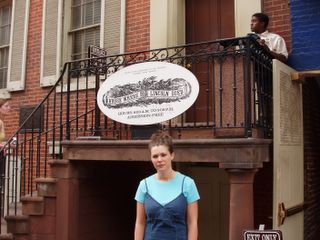 Outside the home where Lincoln died. 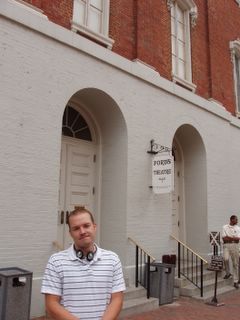 Outside Fords Theater where Lincoln was killed 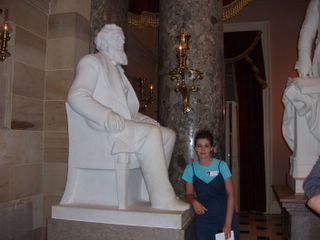 Statue of Brigham Young in the Capital 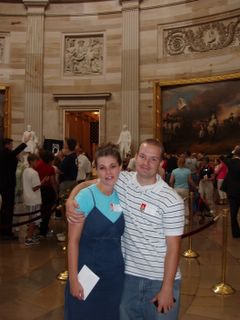 Casey and I on our trour of the capital.

We started the day heading off to see Ford's Theater and visit the home were Lincoln died. It was really neat sitting in the actual theater, seeing the spot where Lincoln was killed and hearing the story. After that, we decided to walk around the Smithsonian for a little bit before our tour of the Capital. One of Senator Hatch's intern took Casey and I on a tour of the Capital. It is a really beautiful building and we were also able to sit in and hear the Senate discussing some issues. One thing I thought was interesting is that every state has a statue of someone who has made a strong impact on our state. Of course Brigham Young was one as well as Philo T. Farnsworth, who had invented the TV...apparently he was from Utah.
Posted by Losee's at 11:09 AM No comments:

On Tuesday before we left to go catch our plane, we wanted to run up to the National Zoo. The Cheeta cubs were recently born, so it was really cute seeing them out there running around. It was so humid because of the recent rain, we didn't want to spend a whole lot of time there, so we headed back to our hotel to pack and get ready to leave.

Our flight home was very long! We arrived at the aiport a couple of hours before we were scheduled to leave. When we got there, we found out our flight was an hour delayed, which meant that we would be missing our connecting flight back to Salt Lake. So they were able to transfer us to another airline where we would fly to Denver and then connect to Salt Lake. But because we switched our flight, we all had to get strip searched, which was a little interesting! Because of weather though, we sat on the plane for 2 hours waiting to depart. Luckly, we were able to watch TV and movies. We finally got into Denver, but we had missed our connecting flight because of the delay, so we were able to get on another flight that was leaving to Salt Lake. Again, we found ourself sitting on the plane waiting to depart. They said that the plane was 300lbs too heavy, and they were working on lighting the load. An hour later we were finally able to go. It was a long day!
Posted by Losee's at 11:00 AM No comments: 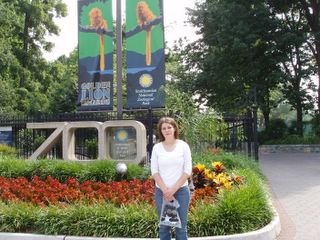 We had an enjoyable Father's Day. We went out to Tooele to see my cousin Scott's homecoming. It was fun seeing family we don't see as much. After that we came back and had a dinner at Casey's parent's house. We all pitched in and got Floyd a trampoline so he can have fun with his little grandkids on it. Alivia, Bryce and Whitney had a lot of fun trying it out.
Posted by Losee's at 9:09 PM No comments: 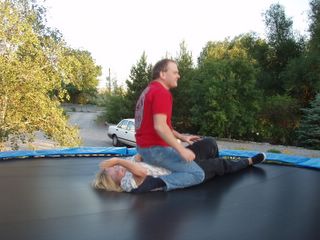 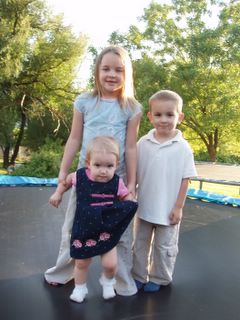 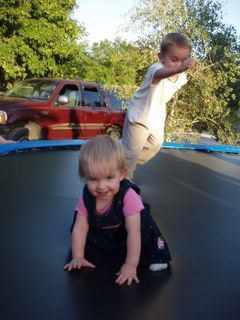 Whitney having fun on the trampoline 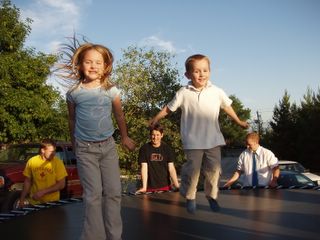 Alivia and Bryce having fun on the trampoline

This week was Strawberry Days so we had a lot of fun activites. We started off the week on Tuesday going to the Peter Brienholt concert. That was really enjoyable to listen to. On Wednesday we went to the baby contest where Autumn had dressed up Braxton in a cowboy outfit, boots, hat and all. He was so adorable! He won the cutest costume award.

Thursday, Allison, Spencer and Casey and I went out to eat with Ashleigh and Randy for her birthday. We went to eat at Bajios and then went to the rodeo together. It was so much fun. My favorite part is the wild cow milking contest. It was so funny seeing all those cowboys running around trying to catch their cows!

On Saturday we went to the Stawberry Days parade. It was so hot!! It was fun to see my dad and sister in the parade. My dad was in the parade because he is a neighborhood chairman and Autumn was in the parade with Braxton because of the baby contest. It was hot and we were glad to go home when it was over!
Posted by Losee's at 8:52 PM No comments: 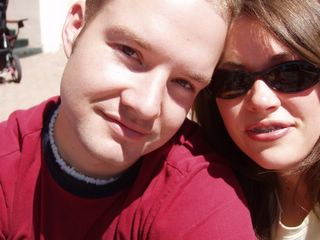 Sitting in the hot sun watching the parade 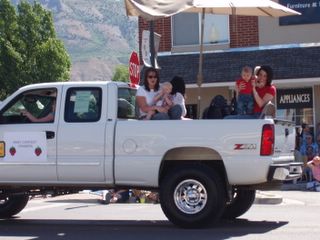 Autumn and Braxton in the Stawberry Days Parade for winning the baby contest. 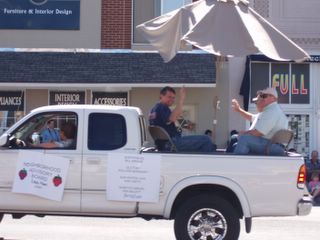 Dad in the Stawberry Days parade for being a neighborhood chairman. 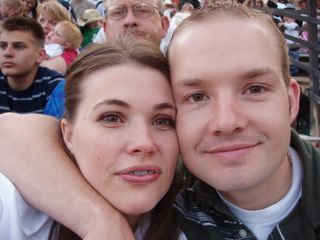 Casey and I at the Rodeo