We had quite the night last night. Our little Belle is pregnant, and we knew that she was due to have her babies any day. On Sunday, we knew that Belle wasn't acting her normal self, so we were keeping a close eye on her. We had to go visit Casey's family, and since she was shivering (I later realized she was contracting), we just wrapped her up in a towel and I held her on the drive over. When we got to Casey's parent's house, I put Belle down, and when I did that, something fell out of the towel. She had given birth to one of the babies, and since we didn't know it was there, it had sufficated. We knew that she had at least two other puppies in her because a couple of days before we had x-rays taken and the vet could see 3 maybe 4 puppies. After 6 hours of nothing happening, we decided to take her to the Emergency Vet Clinic where they gave her a shot that moved the process faster, and she gave birth to two more puppies that came out just fine. The vet thought that she was done and had no more puppies, so we went home. We got absolutely no sleep because Belle wouldn't stay with the puppies, so I ended up sleeping on the floor next to her box and forced her to stay in there all night. Today while I was at work, Casey stayed home with her to make sure she was okay, and around 11:00, she had another puppy! She had 3 girls, and they are all doing fine. Belle is finally figuring out how to be a mom...and hopefully that means we'll get some sleep tonight! 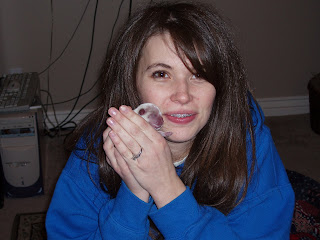 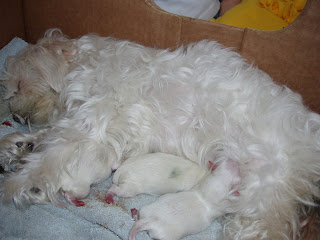